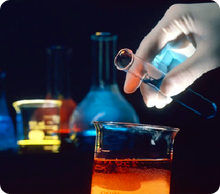 The Registration, Evaluation, Authorization and Restriction of Chemicals (REACH) is an EU initiative to improve the protection of human health and the environment through better identification of the properties of chemical substances. The most significant impact of REACH is to mandate chemical manufacturers and importers to determine the hazardous properties through testing of thousands of older industrial chemicals.

When REACH is fully in force, it will require all companies manufacturing or importing chemical substances into the European Union in quantities of one ton or more per year to register these substances with a new European Chemicals Agency in Helsinki, Finland. Because REACH applies to some substances that are contained in objects ('articles' in REACH terminology), any company importing goods into Europe could be affected.[4]

About 143,000 chemical substances marketed in the European Union were pre-registered by the 1 December 2008 deadline. Although pre-registering was not mandatory, it allows potential registrants much more time before they have to fully register. Supply of substances to the European market which have not been pre-registered or registered is illegal (known in REACH as "no data, no market").

REACH also addresses the continued use of chemical 'substances of very high concern' (SVHC) because of their potential negative impacts on human health or the environment. From 1 June 2011, the European Chemicals Agency must be notified of the presence of SVHCs in articles if the total quantity used is more than one ton per year and the SVHC is present at more than 0.1% of the mass of the object. Some uses of SVHCs may be subject to prior authorization from the European Chemicals Agency, and applicants for authorization will have to include plans to replace the use of the SVHC with a safer alternative (or, if no safer alternative exists, the applicant must work to find one) - known as 'substitution'. As of March 2009, there are fifteen SVHCs.[5]

REACH applies to all chemicals imported or produced in the EU, in contrast to the US Toxic Substances Control Act which only applies to chemicals newly coming into use. The European Chemicals Agency will manage the technical, scientific and administrative aspects of the REACH system.

REACH is the product of a wide-ranging overhaul of EU chemical policy. It passed the first reading in the European Parliament on 17 November 2005, and the Council of Ministers reached a political agreement for a common position on 13 December 2005. The European Parliament approved REACH on 13 December 2006 and the Council of Ministers formally adopted it on 18 December 2006. Weighing up expenditure versus profit has always been a significant issue, with the estimated cost of compliance being around 5 billion euro over 11 years, and the assumed health benefits of saved billions of euro in healthcare costs.[6] However, there have been different studies on the estimated cost which vary considerably in the outcome.

A separate regulation - the CLP Regulation (for "Classification, Labeling, Packaging") - implements the United Nations Globally Harmonized System of Classification and Labeling of Chemicals (GHS) and will steadily replace the previous Dangerous Substances Directive and Dangerous Preparations Directive. It came into force on 20 January 2009, and will be fully implemented by 2015.

Using potentially toxic substances (such as phthalates or brominated flame retardants) is deemed undesirable and REACH will force the use of certain of these substances to be phased out. Using potentially toxic substances in products other than those ingested by humans (such as electronic devices) may seem to be safe, but there are several ways in which chemicals can enter the human body and the environment. Substances can leave articles during consumer use, for example into the air where they can be inhaled or ingested. Even where they might not do direct harm to humans, they can contaminate the air or water, and can enter the food chain through plants, fish or other animals. According to the European Commission, little safety information exists for 99 percent of the tens of thousands of chemicals placed on the market before 1981.[4] There were 100,106 chemicals in use in the EU in 1981, when the last survey was performed. Of these only 3,000 have been tested and over 800 are known to be carcinogenic, mutagenic or toxic to reproduction. These are listed in the Annex 1 of the Dangerous Substances Directive (now Annex 3 of the CLP Regulation)

Continued use of many toxic chemicals is sometimes justified because 'at very low levels they are not a concern to health'.[7] However, many of these substances may bioaccumulate in the human body, thus reaching dangerous concentrations. They may also chemically react with one another,[8] producing new substances with new risks.